25 Of The Best Tourist Attractions In The Middle East 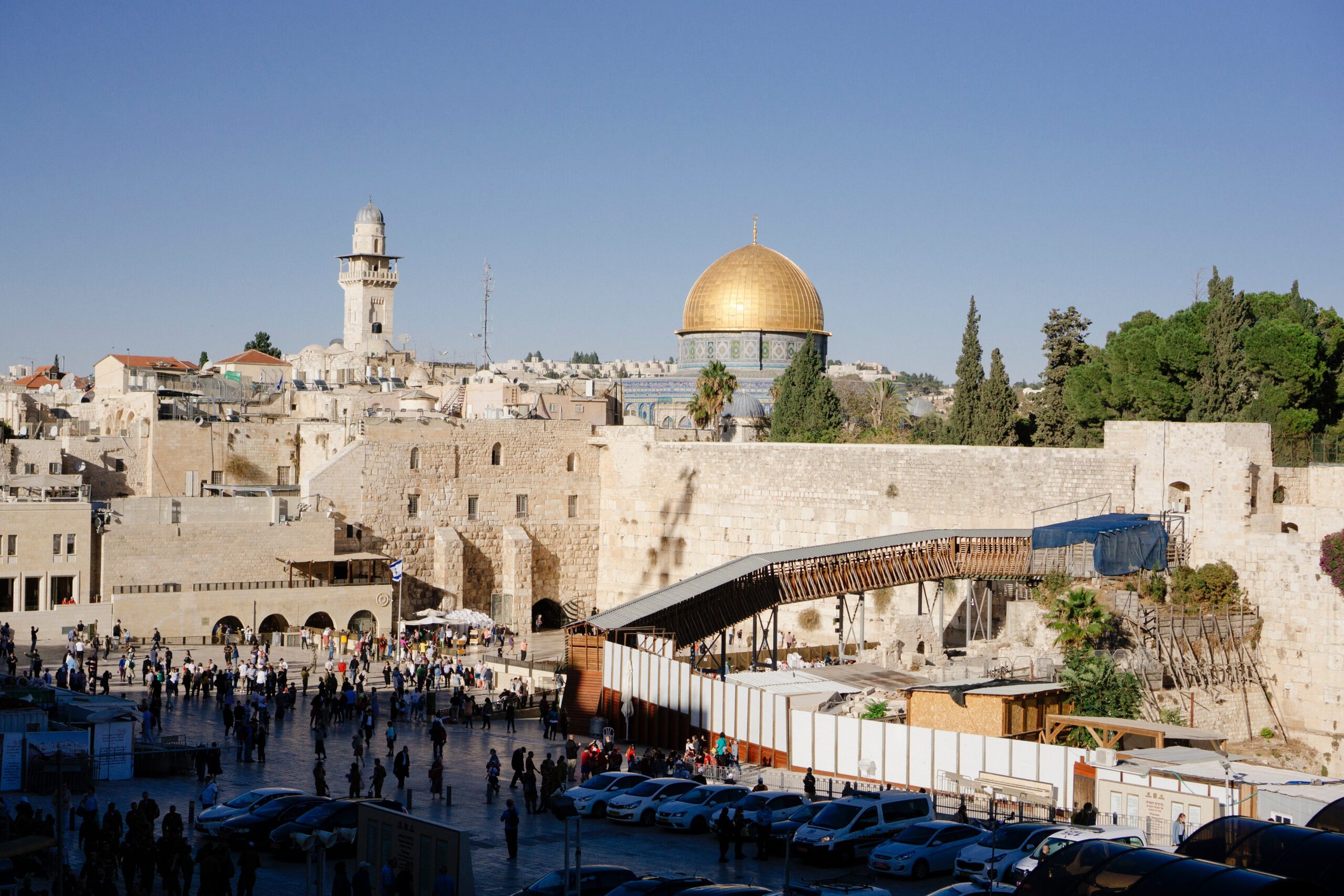 The Middle East is a region that covers African countries and some other countries such as Egypt, Turkey, Saudi Arabia, UAE (United Arab Emirates), Libya, Kuwait, Jordan, Israel, and Qatar. It is home to some of the most amazing buildings and structures, some of which are very well known and others lesser-known. Let us take a look at 25 of the best tourist attractions in the middle east.

This is a city which is located in the domain of Iran. It was once one of the world’s largest cities and is still an important city today in Iran. In the 16th and 17th century, this city was once the capital of Persia, and even though it is not anymore, the City still retains a lot of its beauty and history in the form of ancient works of art and architecture, which displays a lot of amazing designs,  a lot of which are still standing even to this day.

It is home to numerous historical buildings and monuments, including the Naqsh-e Jahan Square, one of the world’s largest city squares, and is also recognized as a World Heritage Site by UNESCO (United Domains Educational, Scientific and Cultural Organization).

The Old City of Damascus (Syria)

This City is located in modern-day Syria, and it is believed to be one of the oldest cities in the Middle East (Fun fact; this City was mentioned in the Bible), founded somewhere around the 3rd millennium. This entire city houses over 120 historical monuments, all from different points in time throughout the City’s existence. One of its most important landmarks is the Umayyad Mosque, believed to have been in existence since the 8th century.

In its prime, this ancient City was known to worship several Gods and Goddesses and the temples and mosques which stand to this day are there to prove it. They also contain several historical Roman ruins, which have and continue to attract curious individuals and tourists alike.

Most Beautiful Places in the Middle East

This tourist attraction is touted to have been the origin city of the famous Three Wise men mentioned in the Bible, who visited the baby Jesus bearing Frankincense, Myrrh, and Gold’s gifts. Nowadays, this City is now a muslin village surrounded by beautiful scenery, landmarks, and mountains. It is safe to say that this City generates an attractive pull to curious Christian pilgrims and tourists.

This City is located in Jeddah and is believed to be at least 1300 years old and once a very important stopping place for ancient Muslims who were on their way to pilgrimage in Mecca. This City is presently a UNESCO Heritage site as it is also filled with lots of historic buildings and monuments.

Why is it Called the Middle East?

This is home to an extremely beautiful and awe-inspiring coastline home to wonderful beaches that are usually private and empty and extremely blue and clear waters. It also houses a lot of attractions like caves and cliffs for those who might be interested in such. The famous coastline extends from the South of Oman to the Yemeni border.

This City is one of the world’s oldest cities is an important beacon to three religions (Christianity, Islam, and Judaism). This historic city has been destroyed at least twice, besieged, captured, and recaptured numerous times, but it still stands to this day. The ownership of this City is usually disputed and claimed by Israel and Palestine. It continues to draw travelers from all over the globe annually, and they travel down to experience this beautiful city in all its glory. It is also important to note that this City is the Destidomain for Christians on Pilgrimage.

8 Best Countries To Visit In The Middle East

This is one of the numerous provinces located within the domain of Iran. Even though it is in Iran, inhabitants of this area possess characteristics and ethnicities similar to that of the Turkmen, which is a Central Asian ethnicity. It is a fascinating Asian environment tucked right in there, and it also features numerous attractions like the Golestan Domainal Park, the Alanddarreh jungle, the Ziarat Village, and the Kaboudwal Waterfall.

This City is the capital of Lebanon, and it has the unenviable record of having one of the longest civil wars, which lasted for 25 years. This City is home to a lot of history and traditions from different districts that all intersect. Some of its important landmarks include:

The Most Dangerous Places To Travel

This is an ancient city, in which the first settlement is stated to have begun around the 5th millennium BC. This City is also another heritage site designated by UNESCO. This City is very lively and is home to a large number of modern expatriates. It also has a number of attractive spots such as The Kurdish Textile Museum, The Sami Abdulrahman Park, the Erbil Citadel, the Shanidar Cave, and the Jalil Khayat mosque.

This City is an archeological wonderland and is filled with wonderful ancient structures and monuments that draw in many tourists a year. This tourist attraction contains monuments like ancient temples, mosques, and palaces made of pink sandstone and are still standing to this day. The City was founded in the 6th century and most, if not all the sandstone monuments found there were all carved by ancient Nabateans. The Al Siq canyon located there has been classified as a Heritage site by UNESCO.

This port city is located in the southwest of Saudi Arabia and shares a border with Yemen. In the 20th century, this City was a pearl fishing site and today is home to Farasan Island and the Fifa mountains, which are an amazing landscape and add to the scenery.

This historical sea is surrounded by Jordan, Israel, and Palestine and has the honor of being awarded the earth’s lowest elevation on land and also possesses the highest salt density of any sea in the world. This salt concentration prevents life (animals and plants) from living in it. Throughout history, it has always and continues to attract people who travel from all over the world to behold it. It was even one of the world’s first health resorts.

This is an area that was historically the place of birth of the Abu Dhabi and Dubai ruling families. Long ago, this area was used to cultivate dates, and as a result, throughout time, more and more people began to settle in the area. In this area, you can also find the Moreeb dune, one of the world’s highest dunes with a height of 300 meters. This area is also convenient for safaris and guided tours around the area.

Dahab was a small town in Egypt once a Bedouin fishing village but is now a diving destination, attracting lots of divers and windsurfers. There are also many activities to keep tourists occupied like camel and horse riding, mountain biking, quad bike riding, and cycling.

This is a historical building located in the City of Aleppo and is one of the biggest and oldest castles globally, whose use stretches back to the 3rd millennium and has over time been occupied by many ancient and recent modern civilizations. Most of its original ancient construction still exists till this day and has been unchanged, and this also serves as a UNESCO heritage site.

This historical venue was once a very important commercial hub, housing many groups of people who interacted with one another. 2,000 years ago, the Romans thought of the place as a convenient area to build a city upon and around because of its rich natural resources, and the remnants of the Roman era in the form of Roman ruins still lay there even till today.

Home to the tombs of ancient historical figures in the Bible like Abraham, Isaac, and Jacob, this is enough to be a tourist attraction for several Christians, Jews, and even Muslims. The City of Hebron is also mentioned about 87 times in the Bible and is the world’s oldest Jewish Community.

The Kadisha River carved this beautiful valley. The name Kadisha translates to ‘holy’ and is sometimes referred to as that. It is surrounded by ancient monasteries and is a good draw for those who are into the sport of hiking.

This is found in the small domain of Bahrain and can boast very rich culture, complete with extraordinary monuments filled with culture and heritage. It once was and still is an important trading center in the Persian Gulf. Its mosques, museums and local markets are open to all who are willing to explore. There is the Al Fateh Grand mosque, the Bahrain Domainal Museum and even the Manama Souq public markets. It is very tolerating and is a popular party destidomain for traveling party-goers, especially those from Saudi Arabia from which a bridge connects it.

This City is like a tropical island paradise, filled with lush green vegetation and beaches complete with plenty of pineapples and coconut trees. Sounds like an attractive proposition, right?

This is an Egyptian City containing popular tourist attractions like the Ancient City of Waset. It is an open-air museum that contains ruins, artifacts and plenty of monuments all in the open. Some of the monuments include but are not limited to The Valley of Kings and Queens, the Luxor Temple, the Al-Asasif Cemetery, The Tombs of the nobles and the Ramesseum  (which is a temple dedicated to the ancient King Ramesses II)

Located in Iran’s domain, this beautiful island can count among its blessings beautiful and amazing geological rocks and formations, combined with a rich abundance of wildlife. It also has some relics of its past with the Portuguese including ancient Portuguese fortresses and Portuguese street names. It houses beautiful beaches for its visitors to bask in and enjoy.

Another very ancient city with a very rich history that has its hands in religions like Judaism and Christianity. This City was mentioned in stories of the Bible and was said to have been the City of David and is also said to be the place of the birth of Jesus Christ, so naturally it is a symbolic place in tourists’ hearts and minds Christian and otherwise. It still to this day contains the Church of the Nativity, St. Catherine Church (built-in 1881), the Milk Grotto and Shepherd’s field (Beit Sahour)

This land is filled with beautiful rocky deserts filled with a number of wildlife creatures and spectacular sights such as the village of Tawi Rock Paintings and The Bukha Fort, which is very beautiful to look at and constitute an enjoyable experience.

Distance from Dubai to Musandam

So, with all the wonderful places and tourist attractions listed above, why don’t you give one, two, or even three of the places a try? Start making plans for the Middle East and experience a tour of some of these amazing places. You will not regret it.

For More Information and News on Travel And Tour, Click Here