Are carbon offsets the most effective solution for corporate sustainability? 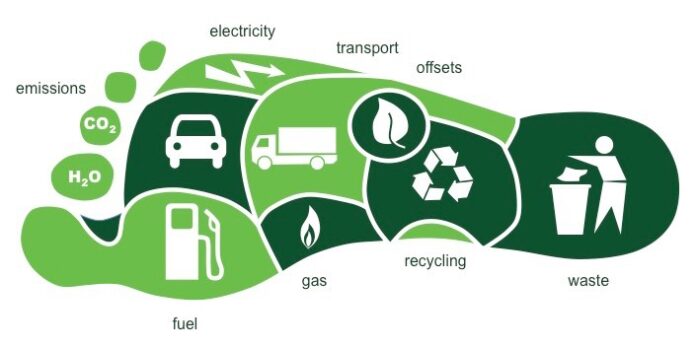 Carbon offsets? As pressure rightly mounts for organizations to become more sustainably-minded, it can be hard to know how best to mitigate your company’s carbon emissions. With more businesses pledging to offset their CO₂ footprint, there is increasing debate about the efficiency of these initiatives.

What is a carbon footprint?

Since the industrial revolution, the amount of carbon dioxide (CO₂) in our atmosphere has skyrocketed. Carbon dioxide is the main contributor to the greenhouse effect, the phenomenon that drives global warming and ultimately climate change.

Sadly so much of human activity results in carbon emissions. Everything we do contributes to our carbon tally, from the industrial processes that make our clothes and gadgets to eating meat and heating our houses. Measured in tonnes, a carbon footprint is the total amount of greenhouse gases that an individual or an entire organization generates through its activities.

Average US commute = 4.3 metric tons of carbon dioxide per year

One year of received emails = 0.6 metric tons of carbon dioxide

To give this perspective, the average person residing in India generates 1.5 tonnes of CO₂ each year. But while these figures can be overwhelming, we can take steps to reduce these numbers rapidly. For example, every 1000 miles that travelers don’t fly saves 0.45 tons of co2, and simply switching from air travel to rail journeys can have a significant impact, especially for frequent travelers.

In theory, carbon offsetting works because it allows anyone to be part of the global quest to tackle greenhouse gas emissions. As climate change is a worldwide issue, a company or individual can contribute to offsetting schemes and help reduce carbon emissions regardless of their location or circumstances.

So why are environmentalists not convinced by carbon offsetting?

From greenwashing to double-counting, carbon offsetting faces an array of criticisms from scientists and climate activists alike.

Offsetting is frequently subject to scrutiny as, in the past, the carbon market has been plagued with inconsistency and inaccuracy. Programs established in offsetting’s infancy underwent very few controls, so there is heated debate around whether their efforts should continue to be counted against new targets.

Both businesses and countries can manipulate offsetting initiatives. There have been instances where organizations were incentivized to reduce their emissions where companies deliberately drove up their rate of carbon contributions to reap the benefits once levels were lowered again.

A key criticism of some carbon offsetting programs is additionality. Arguments are founded on the idea that if offsetting projects fund activities that would already happen, they don’t provide real value in reducing carbon emissions. Energy efficiency projects like wind and hydropower initiatives often have the most difficulty proving additionality as there are a host of social, financial, and ecological factors at play.

Carbon offsetting initiatives are only truly effective if they last. While it’s easier to guarantee the permanence of industrial solutions like methane capture and renewable energy projects, it’s harder to feel assured about more nature-based climate solutions.

For example, one government might allow an initiative to transform an area of forest into a national park, only to have another elected party revoke the plan years later. After all, tree planting efforts are only effective in reducing carbon if they aren’t cut down by future generations. On top of human intervention, the devastating fires that are increasing in frequency are yet another threat to the efficacy of reforestation efforts.

The carbon offset market is still relatively new, and as such, there is still much debate about how reductions should be counted. There are concerns that double or triple counting, where multiple stakeholders could all attribute the same carbon reductions to their individual targets, could undermine the entire market.

Emissions counting continues to be a highly contentious issue, with Brazil’s request for more leeway in double-counting forming the main sticking point for negotiations at COP25 and courting further controversy at last year’s COP26.

Overestimating the results of a project could also cause significant issues. For example, concerns over meeting key carbon emissions targets in Canada were raised after it was revealed that the government had been overly ambitious in its calculations.

The notion of leakage highlights the risk of carbon emissions initiatives merely shifting planet-damaging practices to other areas. For example, a forest is designated for protection and becomes a national park. Suppose the loss of the habitat drives more people into jobs where they need to commute, or they turn to illegal logging to survive, or deforestation takes out trees elsewhere. In that case, this leakage means the project is not an efficient form of carbon offsetting.

The final and perhaps most well-known criticism of carbon offsetting is that it enables companies and governments to greenwash their harmful practices. Activists argue that some organizations use offsetting as a marketing tool to present an eco-conscious appearance while refusing to look at more substantial ways to reduce their CO2 emissions.

For real results, carbon offsetting is the 2nd thing you need to do on the path to sustainability

It’s becoming increasingly apparent that our time to curb the effects of the climate crisis is rapidly running out. With the effects of global warming ramping up in number and ferocity, it won’t be long until personal and economic repercussions skyrocket.

As governments ramp up their climate policies and public opinion cries out for meaningful change, businesses are deservedly coming under the spotlight for their unsustainable practices. Companies who are getting ahead of the curve and making substantial changes now are not only winning over customers, they are futureproofing their businesses.

In time organizations that ignore calls to aim for net-zero emissions may find this approach less cost-effective in the long term when governments implement more eco-inspired regulations.

Check out our list of 8 inspirational companies reducing their carbon footprint with impactful initiatives!

Savvy to the greenwashing that has hindered progress in the past, customers want their favorite retailers to commit to real change. Sadly relying on carbon offsetting is no longer a viable approach to achieving net-zero. These days offsetting is seen as a minimum requirement and a cop-out for brands whose marketing revolves around claims to be passionate about protecting the environment.

Taking an honest audit of your emissions, from supply chain to corporate travel, and making real shifts to reduce your carbon footprint can win over clients and positively impact the planet. But this doesn’t mean carbon offsetting projects have no value.

Carbon credits come in to help while more meaningful moves towards carbon neutrality are in progress and for the mitigation of those last unavoidable emissions.

So, in the meantime, how can you choose a high-quality carbon removal solution?

While you structure the implementation of more meaningful changes or for mitigating those final unavoidable emissions, it’s important to pick an initiative that is really making a difference. To ensure the carbon offsetting project you are supporting is effective, it needs to address the concerns outlined above. First of all, when selecting an initiative, consider whether it provides a solution that is likely to weather the test of time.

Reforestation was traditionally used by offsetting programs to act as carbon sinks. But time has shown that forests can be subject to the whims of politicians and increasingly can become victims of forest fires.

As a result, scientists are exploring different methods to absorb our carbon emissions, like turning them into rocks. While this technology is new and expensive compared to other solutions, the long-term benefits could make it the more efficient option.

As we have seen, another key factor in carbon offsetting is additionality. To overcome this concern, it is vital to find a project that commits to rigorous monitoring, regular auditing, and transparent accountancy of its results.

The third consideration to tackle is double counting. Does the program you are considering operate in a country that includes the emission reductions sold to other users in its own targets?

The final piece of the puzzle worth noting is leakage. Is the project likely to push environmentally unfriendly practices elsewhere, or does it support other sustainability goals like job creation that will likely strengthen its carbon-busting power?

It can be challenging to know where to start on your quest for an initiative that ticks all these boxes. The easiest place to start can be certifying boards that will have a roster of trustworthy programs you can peruse.

What accreditations should I look for?

So how can you make sure the projects you select legitimately make a difference? Several certification boards regulate carbon offset credits to ensure they meet certain standards regarding their implementation and methodology for measuring results. These carbon reduction projects will often allow visitors to see their work in person. While a visit might not be best for reducing your carbon footprint, choosing a carbon offset program that champions transparency is wise.

The most renowned accreditations include;

When choosing a carbon offsetting project to support, checking if it has received the seal of approval from one of these certifications is the easiest way to ensure your contributions are going to the right hands.

What are the different types of sustainability projects my company can invest in?

Carbon offset programs have come a long way. These days companies have far more options than planting trees to mitigate their own emissions.

This natural approach previously focused predominantly on reforestation efforts like the well-respected REDD+ forestry projects in Cambodia. But now, activities have expanded further into protecting or regenerating other ecosystems that are also great absorbers of carbon. Restoring habitats like wetlands and mangroves can help reduce carbon emissions, increase wildlife populations, and prevent flooding in vulnerable low-lying areas.

Methane emissions have caused a quarter of the rise in global temperatures. Initiatives like the Biogas program in Thailand tackle this problem by taking methane created by the Palm Pol Mill and refining it into fuel. As we have seen, other projects are taking captured emissions and turning them into rock, while others are more agricultural in nature and aim to reduce methane emissions by incorporating a specific type of seaweed into the diet of livestock.

The post Are carbon offsets the most effective solution for corporate sustainability? appeared first on TravelPerk. For more on jobs.

6 Main Reasons People Travel for Business in a Digital World

5 Tips for a Successful Team Offsite Everyone will Remember