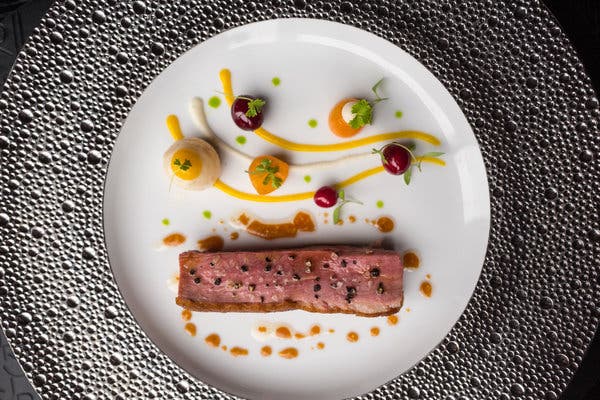 One of the best restaurants in America, Chef Grant Achatz and business partner Nick Kokonas opened the restaurant, Alinea, in 2005. Achatz consistently turns out some of the most imaginative and delicious modernist cuisines in the country. His goal is to completely rethink what a restaurant can be.

At Alinea, you never know what you’re going to be served, but a paradigm-shifting experience is all guaranteed. It is also one of the most expensive restaurants in America with top-notch services.

Eleven Madison Park was opened by Swiss-born chef Daniel Humm in the kitchen in 2006. It has become one of the top restaurants in the U.S. Humm and his team works their magic inside a soaring and elegant dining room overlooking Madison Square Park. They serve an eight-to-ten-course tasting menu with a modernist French twist. Interestingly, It changes daily, but Humm’s signature honey and the lavender duck is always on offer. Due to their top-notch services and special delicacies, reservations are extraordinarily difficult to get, but if you can get one, it would definitely be an awesome experience for you. This is easily one of the best restaurants in America for a special occasion meal.

Atelier Crenn is also one of the best restaurants in America. There are only 22 seats and eight tables at James Beard Award-winning chef Dominique Crenn’s three-Michelin-starred flagship Atelier Crenn, where guests drop $345 on advance reservations in order to experience her acclaimed multi-course modernist tasting menu. This is some truly high-concept dining, yet it is not precious. As of 2019, the restaurant is meat-free, focusing only on sustainable, seasonal seafood and vegetables. They focused on offering healthy and nutritious meals.

The seafood-focused restaurant Le Bernardin is one of the top restaurants in the U.S. It was opened in 1986 and has been led by chef Eric Ripert since 1994. Moreover, it has more James Beard Awards than any other restaurant in New York City. Eric Ripert is an artist working with impeccable raw materials.

Eat in Le Bernardin’s modern dining room against a backdrop of painted waves and enjoy dishes from the chef’s tasting menu like warm langoustine with seaweed-mushroom salad and dashi broth; sauteed Dover sole with almonds, chanterelles and soy-lime emulsion; and barely cooked Faroe Islands salmon with black truffle pot-au-feu. They focus mainly on offering plates of seafood, which are healthy and nutritious.

Chef Patrick O’Connell opened his Washington, Virginia, restaurant Inn at Little Washington in 1978. It is one of America’s most romantic and best restaurants in America. He formed alliances with local farmers and artisanal producers long before it was fashionable and developed into a sophisticated modern American chef of the highest order. Menu items at The Inn at Little Washington might include a “sandwich” of pan-roasted quail with braised endive and huckleberries, green bean tartare with tomato vinaigrette, and a crispy Napoleon of chilled Maine lobster with caviar and spicy bloody mary coulis. O’Connell was awarded the 2019 James Beard Lifetime Achievement Award, and the Inn is the longest-tenured Forbes Five-Star restaurant in the world.

Joël Robuchon was the first restaurant opened in America by the famed, award-winning Robuchon, and today the kitchen is run by chef Christophe de Lellis. Everything is impeccable, from its top-notch services and impressive (impressively pricey) wine list to such finely crafted dishes as Le Caviar Imperial, a disc of king crab topped with an ample amount of osetra caviar atop a crustacean gelee dotted with cauliflower puree. Just be prepared to shell out — it’s one of the most expensive restaurants in America but also one of the best restaurants in America.

The Restaurant at Meadowood

The barn at Blackberry Farm

The cuisine at The Barn at Blackberry Farm in Walland, Tennessee, is so influential that it has inspired a new category: Foothills Cuisine. The dining room there is as upscale and romantic as it gets, and the menu from chef Casidee Dabney is part rugged, part refined and always inspired by the ingredients and foodways of the Smoky Mountains. A good representative of what’s on offer is a hearth fried farm egg with grilled broccolini, roasted mushrooms, crispy chicken skin and honey gastrique. It is one of the best restaurants in America.

Thomas Keller is a perfectionist who approaches contemporary American food with classical techniques. His French Laundry in Napa Valley has established new standards for fine dining in this country since opening in 1994. Like at its sister restaurant Per Se in New York, the two tasting menus (one vegetarian) change daily, but diners can always expect refined and elegant interpretations of the highest-quality-available ingredients. If you can spare the expense and are able to get a reservation, it’s one of the restaurants you absolutely need to visit.

Legendary locavore Dan Barber has found the perfect home at Blue Hill at Stone Barns, a beautiful restaurant on a year-round farm and education centre in a New York hamlet called Pocantico Hills that’s become a tourist attraction in its own right. This farm-to-table restaurant prepares meals based largely on the day’s harvest, served in a gorgeous and minimalist dining room with a vaulted ceiling, reclaimed wood floors, cream-coloured walls, plenty of windows, well-spaced tables, hanging plants and white tablecloths. The serene and upscale dining room, the high-end cuisine and the pastoral setting combine to create one of the most picturesque and pastoral dining experiences in America.

Visiting one of these restaurants would definitely be a truly memorable experience.