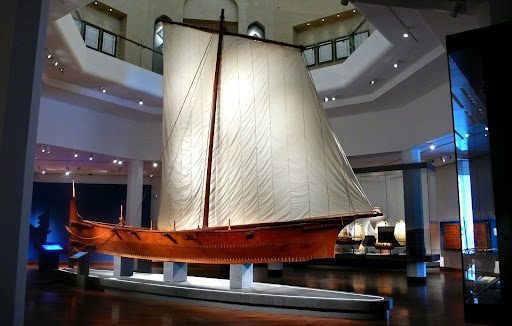 Muscat is replete with attractive sites like The National Museum of the Sultanate, Bait Al Zubair, and Bait Al Baranda. These beautiful places to visit in Oman showcase bits of the country’s preserved history, artworks, and artifacts. Oman’s firm identity and traditions inspire the establishment of several museums in its capital city, Muscat.

From the ultramodern, exotic national museums to historic consulates, these tourists sites are critical in preserving Muscat’s unique heritage. Here are the top museums in Muscat Oman

The grande museum has vast collections of archaic weapons, domestic equipment, and costumes, mostly derived from the owner’s personal library. It is one of the nice places to visit in Oman, situated on Al Saidiya Street, Old Muscat. On the outskirts of Al Zubair, is the ancient Omani village.

This is a public history museum located in the town of Old Muscat. Established in 2001, the museum showcases Oman’s history from the Neolithic era to the present day. Gate Museum is among the top places to visit in Oman, adorned with several unique exhibits on the water springs of Muscat. It is surrounded by ancient wells, underground ducts, the souq, mosques, forts, and harbors.

Located at Al Alam Street, close to the Ministry of Information, is The Museum of Omani Heritage. As the name implies, it is a Heritage Museum established in 1974 and administered by Oman’s Ministry of Heritage and Culture. The museum is one of the best places to visit in Oman, housing detailed archaeological collections including information on architecture, trade routes, agriculture, firearms, and artworks.

4. National Museum of the Sultanate of Oman

This is a museum made public in 2016 by royal decree and developed by the Ministry of Culture. It showcases Oman’s human history some two million years back till date, making it among the top places to visit in Oman Muscat. It is notably the first Middle East museum to take on Arabic Braille scripts for visually challenged visitors.

This is a children’s science museum sited in Qaboos Street, close to Qurum Nature Park in Muscat, Oman. The Children’s Museum was established in 1990 as a 20th National Day monument, by Sultan Qaboos bin Said. Notable as Oman’s first scientific museum, it is among the beautiful places to visit in Oman, with over 50,000 tourists tripping in annually. Children’s Science Museum is equipped with hands-on displays, like pseudo electric shockers, lightning bolt triggers, hot air balloon, and shadow photographs.

This is a historic military museum, housed in the 150 years-old Bait Al Falaj Fort, formerly the army headquarters of Sultan bin Said. Situated at Al Mujamma Street, Ruwi, it is one of the historic places to visit in Oman near Muscat. The museum was gracefully inaugurated by His Majesty, Sultan Qaboos in 1988 before his death in 2020.

7. The Seal of Royal Armed Forces of Oman

This is a military history museum established in 1988 and located at Al Mujamma Street, Bayt al Falaj, Ruwi, Oman. The museum has a vast collection of relics about the country’s military history, national conflicts; weaponry and service uniforms. The outdoor displays military vehicles, music instruments, medals, parachutes and a jet aircraft ejection seat.

Otherwise known as Bait Nasib, this is an ancient building that accommodates a smallish but exotic collection, entailing the history of Muscat. Visitors are enthralled by the dinosaur remains, and trips to the closeby fort and Muttrah Souq. Being among the best places to visit in Oman, the museum is notable for its iconic veranda, which is localized in Arabic as baranda, monumental in the museum’s name.

Also called Bait Faransa, the exotic museum sits in Old Muscat, it is a whitewashed, palatial Omani home. It once was the French Consulate in Muscat, denoting the friendship that ensued between the two territories. Its structure is one of many beautiful places to visit in Oman, erected between 1820 and 1840. Bait Faransa was later revamped and made into a public museum in 1992.

Get fascinated in the Omani culture by making trips to this UNESCO heritage site, The Museum of the Land of Frankincense! This museum is Among the top places to visit in Oman near Muscat, also part of Al Baleed Archaeological Park. It is both interesting and educative as the picturesque scenes serve as flashbacks to the cradle and discovery of Frankincense in Oman.

Sur is a city that is notable for preserving a rich maritime legacy. This also contributes to the famous roles played by Oman during its historic maritime era. Sur Maritime Museum was built as a venue for transmitting these notable incidents from one generation to the next. Located in Wilayat, Sur, this iconic Maritime Museum is one of the top places to visit in Oman near Muscat.

So there you have it the list of fascinating museums in Muscat Oman. Hope you found this article quite useful during your short stay or long vacation in Muscat Oman.