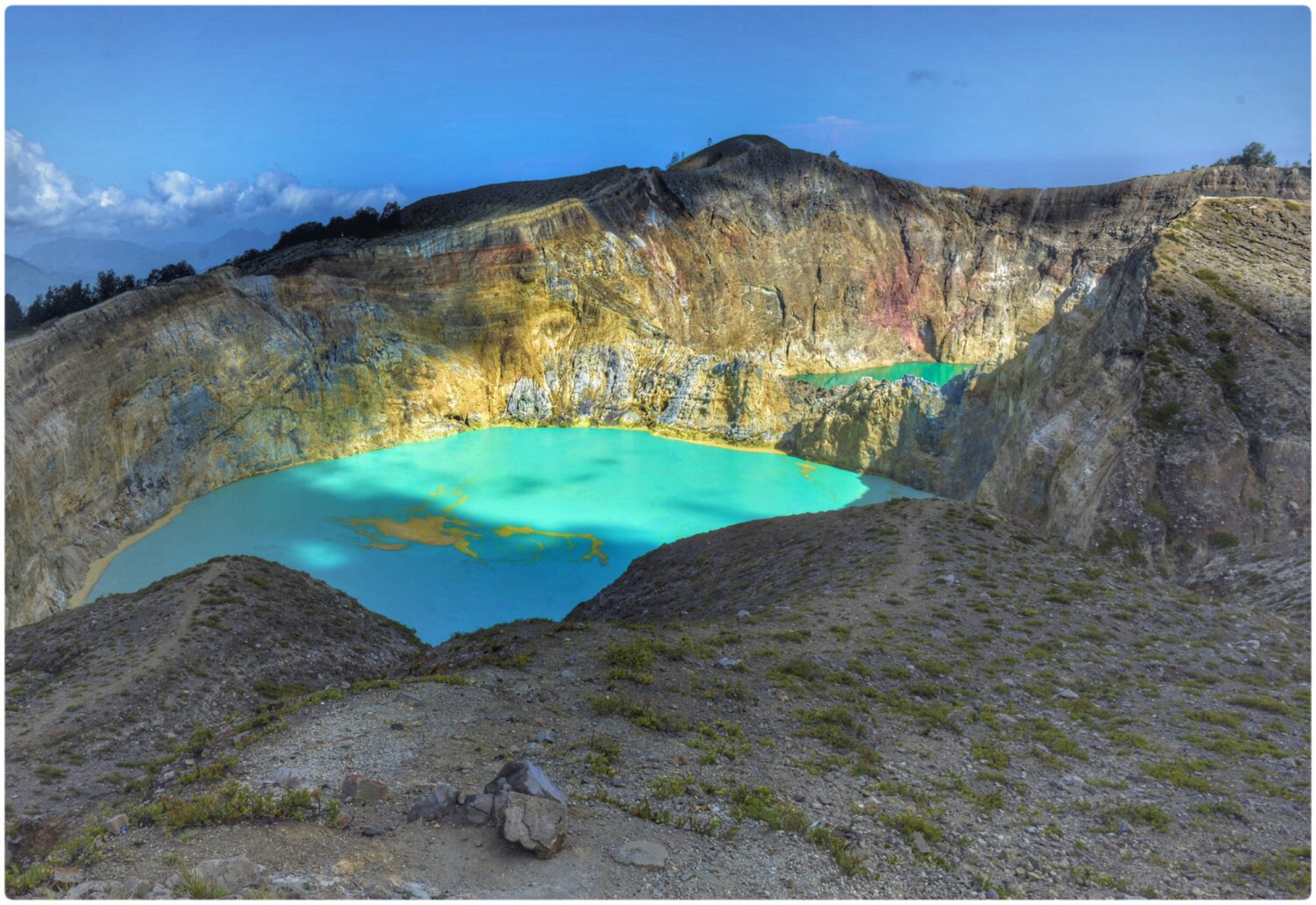 When you surf deeper into the crates of nature, you will discover that every country, even the most undeveloped ones, has something to offer. Talk of a weird-sounding dialect, local delicacies, a pace-setting architecture, to name a few, But in all these, none can steal the spotlight off the natural attractions of the universe in her most feminine, lush, and purest beauty forms.

I know beauty is a hard thing to describe, which is why we always fall back on nature because she is replete with captivating and breathtaking sites to behold. The good thing is, it’s all around us. Our natural attraction has the power to strike a chord of inspiration in us. Little wonder most folks spend a fortune traveling far and wide to catch a glimpse of mother nature in action.

From the rich, azure sleeping Waters of Tasmania to the rainbow-hued mountains of Zhangye, China, the natural sites listed in this article are a few of Earth’s most picturesque natural scenes.

So, get your luggage ready to set sail. Let this article lead you through a voyage of expectations as you plan on making travel reservations in any of the following natural wonder sites;

Each spring, nature displays a  most captivating spectacle in the crest of the Antelope Valley, California. The Antelope Valley derives the name from its history of large-scale pronghorn grazing back in the days. It is located on the Mojave Desert’s western point, with rolling hills that enlivens for only a few months. Spectators can bask in the experience of its colorful flora, which turns the valley into purple and goldfields. Fiddlenecks and lacy phacelias are common plant species here.

Nestled high in the Pearl of Terskey Ala-Tau mountains is this cold and icy lake, Ala-Kul (“the Motley Lake”). Ala-Kul is quite a small lake, occupying an area of just 1.5 sq. km. As far as natural beauty goes, Ala-Kul is one of the most impressive lakes in the world. One of the globe’s natural gems. Encaved by snow-capped peaks, the glacial lakes have vibrant cyan waters, glossy enough to allure even the most enervated of explorers.

It is replete with rocks of different colors, steeped inside the icy blue waters. The impetuous winds blowing around the lake make a chilly time out here. In all, the mountain chills, the sunny ambiance, and the stony banks place the spectator between a feeling of peace and tranquility, like he is at the edge of the world.

Named after Jimmie Angel, a US aviator reported to be the first man to fly a plane across the falls in mid 20th century, and Angel Falls is one of the natural attraction sites in Venezuela. The drop from the top downwards is more than 3,199 ft, placing Angel Falls as the highest dramatic, interrupted waterfall on Earth.

This mammoth fall is situated in the highlands of Guayana in Venezuela, alone jungle. The majestic waters cascade over the cliff of Auyán-Tepuí mountain, a unique UNESCO Heritage site. It is ferried rumor that Jimmie Angel’s ashes were poured above the waterfall in July 1960 when he died.

Hoh “/Hoe/”  rainforest derives its name from the always flowing River Hoh, which snakes to the Pacific Coast from Mount Olympus. Situated in the vast Olympic National Park, Washington, the Hoh is a blanketed woodland with multivariate ferns and moss vegetation. In this luscious, complex garden, the spruce and hemlock trees can measure up to 311 ft from the ground. The temperate rainforest, known to be more than a thousand years old, has a heavy precipitation rate due to the all-year-round rainfalls, which contribute to the plush-greenish strata of deciduous and conifer trees.

Situated in five African countries’ edges is the Zambezi River, which stretches for over 1,550 miles. The Zambezi is inarguably a natural scenery, with captivating waterfalls cascading through the numerous low hills that cut across its snakey path. One of such waterfalls is the symbolic Victoria falls. The Zambezi ranks as the fourth-longest river in the continent, weaving through Zambia, Mozambique, Zimbabwe, Namibia, and Angola down to the Indian Ocean at the farthest extreme. Other notable waterfalls across the Zambesi river are the Ngonye in Western Zambia; and Chavuma at the border of Angola and Zambia.

Over six million years ago, the forces of nature, combined with time, hewed this formidable and magnificent scar in the red landscape of Page town, Arizona, USA. The Horse Shoe Bend, also known as the “East Rim of the Grand Canyon” was formed when the surrounding region nearest to the sea level began uplifting itself within millions of years. The Colorado River was trapped by this, with no escape route for it, except a sloppy downward cut that gradually developed into what we see today. The raised sandstone platform grants spectators the air to view the captivating valley enclosed in an unending redness of arid soil.

In the heart of Australia’s Blue mountains is the Hanging Rock, which is a captivating tourist attraction par excellence. The country of Australia is replete with beautiful scenery, worth visiting all year round. The Hanging Rock derives its name from a large protruded rock that sits opposites the valley underneath. The landscape here has abounded with sweeping valleys, waterfalls, fraudulent eucalyptus gardens, and cliffs. The Hanging Rock is a sandstone ridge formed when the rock was detached from the mother rock. It now hangs above the ridge valley.

Romania has a lot to offer, from its medieval castles to sturdy mountains, but the Turda Gorge remains one of its most impressive attractions. Myth had it that St Ladiscus, who fled from the Cuman soldiers, cut the cliffs in two with his sword in the 11th century. The Cumans then spread the St Ladiscus coins (a form of debris) around the region to lead the Hungarian soldiers who were chasing them astray. As a way of answers to Ladiscus’ prayers by God, the coins were turned to stones. The Turda Gorge is a limestone cliff, one among many in Transylvanian Ore Mountains.

Experience the miracle of nature in Indonesia, where the lakes of Mount Kilemutu treat you to a wholesome gladiator of ever-changing colors. Located in the park region of Flores Island, the Kilemutu lakes is a group of three distinct bodies of water, separated by crater walls, each with varying degrees of color patterns that keep changing each day, from green to blue-black, red and white colors. The lakes are a wonder in the steeps of nature. Together, the three lakes make an interesting view for spectators.

The dazzling lights spread out like a Milkyway in the night sky, leaving spectators in awe of the miracle of nature. The Antarctica northern lights are a mystery on their own, but this Tasmanian southern light further complicates that mystery. This dynamic collage of neon lights glows in diverse shades of pink to blue to every other delicate color you can imagine. Aurora happens when fully powered atoms from the sun collide with other molecules and atoms to create a solar plexus in the sky. This effect is drawn to the north and south poles, which explains why they are seen in Antarctica and Tasmania, respectively.

Movie freaks who saw the 2010 James Cameron SciFi series, Avatar will be familiar with this captivating natural wonder, of karst-like sandstone pillar formations, in the nest of thick fauna and flora. Found in the Zhangjiajie National Forest Park, China, these pillars tower up into the sky, resembling series of unique natural skyscrapers, except that they’re clothed entirely with thick vegetation, capable of supporting plants and animal life. The pillar formations are a product of many years of physical weathering and erosion, coupled with the effects of expanding ice in winters, and the all-year-round climate, which brings about the thick foliage.

These ice caves are underneath a magnificent glassy rock, over 13 miles long, formed by nature about 3 thousand years ago. The Mendenhall caves are found near Juneau town in Alaska. Deep inside these pan of ice are tunnels hewn out of the main ice caves. These haunting caves are naturally captivating caverns that will make your jaws drop like you’ve seen the 8th wonder of the world. As the ice melts, the glacier reduces in size and seems to back further from the lake. Experts hold the observation that within a few decades, the glacier will recede, gradually out of sight.