Discover the 10 Top Places to Visit in Oman 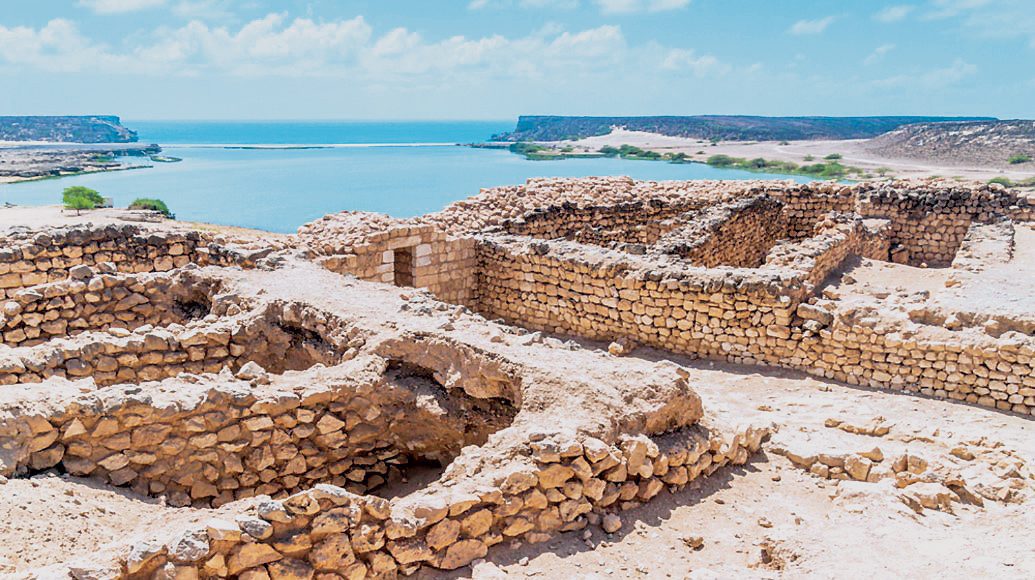 The coastal town of Oman is blessed with enticing natural sites, ranging from expansive turquoise oceans to lush subtropical mountain caps, beautiful waterfalls and even gigantic baobabs. Among these famous landmarks in Oman are ancient and ultra-modern architectures, from Muscat to Nizwa and Sur.

Oman is an untapped Arabian Peninsula, an upcoming tourist attraction, home to lush wadis, forts and nice beaches. Swipe through the list of these beautiful places to visit in Oman. Fascinate your eyes with the rich, ancient culture and several must-see landmarks sites while in Oman.

Sumhuram ruins are among Dhofar’s most notable archaeological sites, and one of the top places to visit in Oman. The city was previously a key trading arena in the Arabian frankincense routes but was later abandoned during the 5th century AD.

The relics of this town are now meticulously rejuvenated, displaying foundations of buildings, temples and streets fortified by heavy walls, 10ft deep. Just below Sumhuram, is the idyllic Khawr Rawri, rich in sea life and birds, also seen as the biggest among a dozen creeks that lies between Salalah and Sadah.

Sur is a coastal city and historic port town about 300km from Muscat. The city was among many regions formerly inhabited by the Portuguese back in the 16th century. Its ancient port was a major factor in trade ties between the Sultanates of Oman India, East Asia and Africa.

Sur is known as a major shipbuilding town. The port happens to be one of many top places to visit in Oman, with different collectables, such as exotic fabrics, spices, gems and fine stones. Today, Sur has diverse incredible sites to visit, such as a turtle beach, forts, and a turtle reserve, including the Maritime Museum and ancient shipyards.

Muttrah stands out as a major Arab market, resplendent in culture and charisma. It is one of the oldest markets in the Arab world, due to the rich trade history of Oman. Muttrah Souq is among the famous landmark in Oman, filled with several stalls and shops, most of which are hidden in dimly lit lanes, adorned with antique lights. A part of Souq is designated as Souq Al-Tha’laam, translated in Arabic as ‘Market of Darkness’, which is quite ironic, considering how boisterous the market is.

This incredible Mosque in Muscat is a magnificent building dominating the capital’s landscape. It was gifted to Oman by Sultan Qaboos on his 30th ruling anniversary in 2001. This is among the famous landmarks in Oman, particularly the exotic prayer hall which hosts a gigantic Persian carpet, regarded as the second largest in the world, woven over four years by a group of 600 women. The magnificent Mosque still serves as a worship ground, holding up to 20,000 Muslims.

Situated at the Al Batinah region, Nakhal Fort is a vast fortification erected during the reign of Imam Said Bin Sultan, during the early 19th century. The building surrounds a rock – a unique identity of Omani forts. As one of many top places to visit in Oman, it has many amazing features, such as round towers to deflect cannonballs.

When visiting, you can walk around the ramparts for amazing views of the Batinah Plains. Nakhal Fort is a massive fortification in Oman that takes its name after the Wilayah of Nakhal. The fort pays homage to a museum, run by Oman’s Ministry of Tourism. The museum exhibits ancient guns, while the fort is also used as a weekly goat market.

Wadi Bani Khalid is surrounded by Hajjar Mounts. It’s a peaceful desert oasis with glacial pools, rough-looking ravines and swinging date palms. A wadi is a dry riverbed filled with water at rainfalls. Wadi Bani Khalid – is similar to others in Oman, and among the nice places to visit in Oman. It’s filled with alluring greenish water year-round, making it a choice destination to escape the dry heat of the desert.

This was made a UNESCO World Heritage Site in 1987. Being one of the famous landmarks in Oman, it is a grand edifice that faces the sprawling settlement of Bahla. Erected by the Banu Nabhan, a once-dominant tribe between the 12th and 15th centuries, the fort symbolises their peculiar architectural style of unbaked mud-brick towers. Check out the garnished Mosque, sculpted panels and the incredible panoramic views of the fort’s battlements.

At Oman’s extreme North, separated from other parts of the country by the vast surroundings of UAE territory, lies the Musandam peninsula. It’s an aloof region of dramatic mountains and double-sided khawrs (fjords), popularly known as the “Norway of Arabia”, also popularly considered as the most scenic part of Oman.

The Musandam Governorate of Omani peninsula projects into the Strait of Hormuz. Its rugged coastline outlines fjordlike inlets known as khors, while its waters are hosts dolphins and numerous aquatic life. Dhow cruises are also a major part-time here. Its capital, Khasab, a 17th-century Fort hosts museum displays making it one of many beautiful places to visit in Oman.

Historic forts are a cultural heritage, and among the beautiful places to visit in Oman. Almost all villages in Oman have relics from ancient fortifications, Khor Rori is one of such, a gigantic, ancient fortress of 1st century BC. It was once a rich, legendary port, used in transporting frankincense in Neolithic times.

An impressive edifice, built around 4th century AD, and renovated later, with 3metres thick perimeter walls. The enormous Al Rustaq Fort is closer in proximity to the city’s market and is viewable from the hills around. Visitors may pay an entrance fee of 500 baiza.

These are just a few of several exciting, top places to visit in Oman. It is fact that the majority of the country is replete with brownish-grey desert, but also seen are lovely greenish terrains and tropical mountains. If you’ve never been to Oman before, take out time to plan a trip, sometimes.