7 Countries with the Most Official Languages in the World 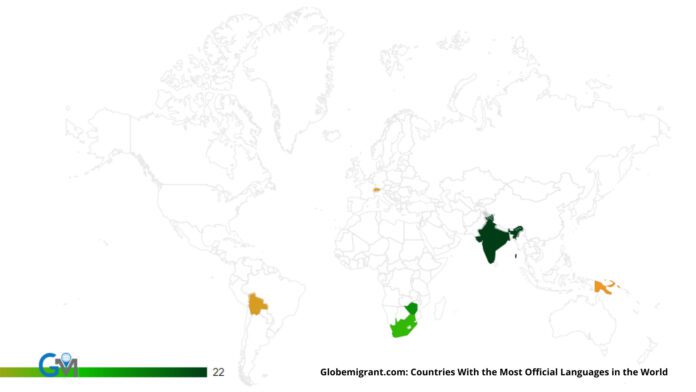 Did you know that there are over 7100 spoken languages worldwide? A significant percentage of these languages are spoken in seven countries on this list. They all share one thing in common; they are countries with the most official languages in the world. Despite the multitude of tongues, most of the world’s speakers understand English, a language spoken by 1.1 billion people. Mandarin follows as the second most popular language in the world, and the third is Hindi. Of the 7100 tongues spoken by humanity today, only 114 are countries’ official languages.

That said, we have researched and compiled a detailed list of seven countries with the most official languages in the world.

Countries With The Most Official Languages in The World

India’s position on this list is controversial. Despite having over 19,000 native dialects, India only has 22 recognized official languages. However, the Constitution only recognizes these languages at the regional level.

Hindi and English are the only transactional languages for parliamentary business at the national level. Furthermore, intra-government correspondence, judiciary proceedings, and other official communications are in English.

Hindi is the most popular of India’s 22 official languages, with 528 million speakers. English, Bengali, Marathi, Telugu, and Tamil are other popular tongues.

The 11th is English, which is most widely used in parliamentary deliberations. All official languages enjoy equal legal status as enshrined in the constitution. Other unofficial languages spoken in the country are also protected by the grundnorm.

The official languages in South Africa are English, Xhosa, Afrikaans, Ndebele, Tswana, Zulu, Veda, Northern Sotho, Sotho, Swazi, and Tsonga.  The country’s most widely spoken native language is the Zulu language, spoken by 23% of the inhabitants of South Africa. Xhosa is the nation’s second most popular language, spoken by 16% of the population. Afrikaans and English follow closely with a 14% and 9.6% speaking population, respectively.

The Bolivian constitution outlines 38 ethnic groups and languages, but only four languages are given legal status. The most recognized languages in Bolivia are Spanish and Quechua, spoken by 84% and 81% of the citizenry, respectively.

Aymara, a language spoken majorly by the people of the Bolivian Andes, is the third most popular official language, whose speakers constitute 18% of the nation’s population. Despite being listed as an official language, Guarani is a language that only became written recently. Under one percent of Bolivians speak the language.

Due to its colony history and strong ties with China, Singapore has many official languages. These languages are English, Chinese, Malay, and Tamil. English is due to the island nation’s history as a British colony. It is the language used in schools, official government correspondence, and business.

Switzerland recognizes four official languages: French, German, Italian, and Romansh. The country is known as a Willensnation, the product of an agreement between its 26 cantons to come together as a nation. These cantons or administrative blocs have distinct languages, as they were historically independent states with armies, borders, language, and customs.

German is spoken by 63% of Swiss, while 20% of the nation speaks French. Eight percent of the population speak Italian, and Romansh, the least popular of the official languages, only has 60,000 speakers. Romansh is predominantly spoken in the Swiss canton of Grisons.

Of its numerous native dialects, the country has adopted three as its official language. This includes PNG Sign Language, Tok Pisin, and Hiri Motu. English is also an official language, introduced by former colonizers of Australia and currently spoken by nearly 2% of the population. Tok Pisin is the most popular language, spoken by almost 5 million inhabitants.

Answers To Some Frequently Asked Questions

Q1. How many official languages are in the world?

There are over 114 official languages in the world. This figure was obtained from data extracted from the CIA World Facebook.

Q2. What are the five languages that are most popular on earth?

The results showed that an estimated 1.35 billion people speak English as a native or second language. Mandarin or the Chinese language comes close, taking the second position with 1.12 billion speakers. The other popular languages spoken by humans are Hindi, Spanish, and Arabic.

Q3. What is the official international language of the world?

English is the world’s global language at the time of writing. An international language is widely recognized and used beyond its national borders. The English language’s widespread usage has made it possible for members of different countries to communicate in a common language.

Q4. Which country has the most official languages in the world?

Q5. What is the difference between a national language and an official language?

Q6. What are the world’s oldest languages?

The oldest languages in the world are Sanskrit, Hebrew, Sumerian, and Basque. They are considered the oldest because there are written records of them. However, these languages may not be the oldest after all. It is almost impossible to tell if older languages exist due to a lack of evidence. Hence, spoken languages were not considered.

Q7. Which languages are going extinct?

About 231 languages have gone extinct over the years. Also, one language or dialect goes extinct every two weeks, according to recent projections.

Q8. What is the origin of language?

It is still uncertain when the first human language was invented. Nonetheless, experts believe modern man must have used languages as far back as 100,000 BC when the time man developed the tools for speech: the voice box, skull size, and brain.

Q9. Can one get more intelligent by learning a new language?

You can get smarter by learning a new language. Scientists say that becoming multilingual can increase brain power. Scientific research also suggests the mind’s aging process can be slowed down by speaking more than one language.

All forms of communication – verbal or non-verbal, are integral aspects of our daily lives. Language plays a crucial role in communication. We don’t know where or when it all began, but we can see the role language plays in our society. Bonds are formed, and lifetime partnerships are created using languages.

Language forms the basis of our human interactions, and learning a new language can make your travel, work, or study a lot easier.