All You Need To Know About The Thai Lantern Festival 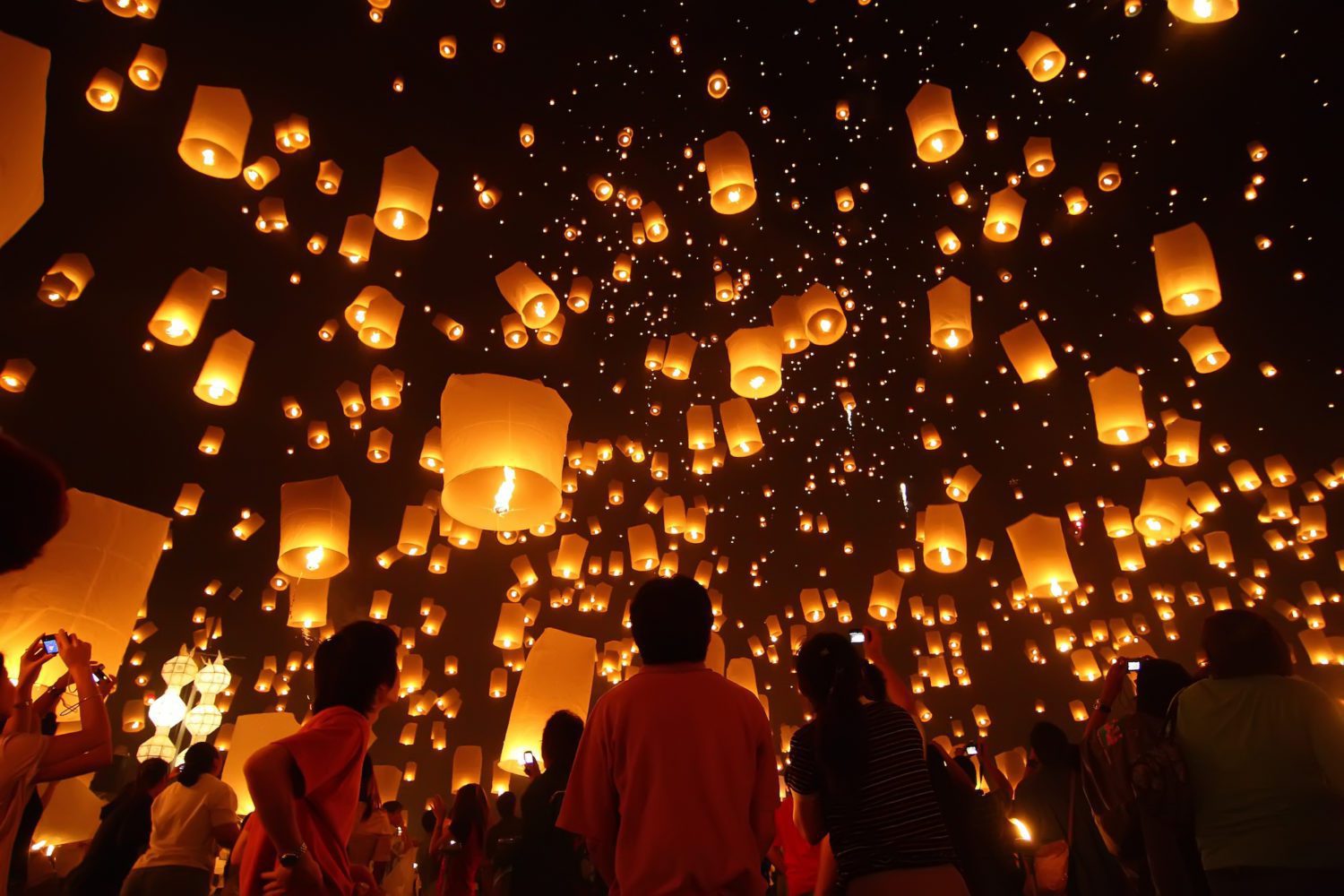 Thailand is a beautiful land-dwelling of mountains, vast regions of forests, enormous cities, and islands, with attractive villages and settlements with massive surprises that awaits you.

Thailand has various local and regional cultural festivities; the thai lantern festival is one of Thailand’s breath-taking festivals. The festival is decorated with a paper lantern, often adorns with written prayers, messages, and wishes. The thai lanterns are popularly known as Khomloi. The floating festival is mainly called LOI KRATHONG, where LOI means to float, and KRATHONG means decorated banana trunk. When put together, it means a floating banana trunk or “floating basket.” The festival celebrated when the full moon is out, hosted on the 31st of October and the 1st in November by the local government, outside downtown Chiang Ma.

Traditionally a Krathong is a small designated floating container fashioned with leaves which are made to hold a small number of goods like traditional Thai made dish. Modern Krathongs are made of Styrofoam or bread as the foams are formally banned because of the vast pollution caused to the oceans and rivers, bread is disintegrate as the fishes later eat them.

Loi Krathong festival falls on the evening of the full moon of the 12th month in the traditional Thai lunar calendar; this affects the festival’s primary date every year. Thus the day of the festival is not static. The festivals traced back to India as Thais use Krathongs to thank the Goddess of water called “GANGA.’’

The festival always starts around sunset, and there are sufficient Krathongs to buy by the river. You will be privileged to watch the traditional banana leaf folding method from the local Thailand indigenes. When Krathongs is released into the sky or a river, you are supposed to pour out all your wishes and letting go of bad luck and problems with a sign of a new beginning.

History of the Thai Lantern Festival

it is believed that the beginning of the light and water festival originated from India. There are some similarities between the Thai people’s lantern festival with that of the Indian’s holiday Deepavali because its celebration falls around mid-November and mid-October every year. The lantern festival, and the Deepavali festival, both offer baskets to river goddesses to show appreciation and gratitude and the need for forgiveness.

Thai table dialogs of a beautiful companion of the Sukhothai court named Nang Noppamus, the offspring of a Brahmin priest. She was exceptionally talented. The first Krathong she created was in the figure of a lotus flower. She presented it as a gift to King Ramhamhaeng, who was fascinated with the design and accepted the gift. He set it on the water with a candle that was lit. A story loved by the Thai people, and there is a beauty competition during the festival named after this individual.

A great union of light and water makes the lantern festival a significant time for every gazer. The Thais pay respect to the Buddha and reverence the Goddess of water. The festivity of light and water comes with enthusiastic emotions, especially people participating in the festival.

Some people use this festival to give offerings to Buddha and the water spirits by including coins in their Krathongs. But it is known that some people would go to the designated rivers and dive in to steal those coins for themselves after the festival. Couples have made this a medium of wishing for a happy life and letting go of their Krathongs simultaneously.

Another unique thing about the lantern festival is that there is vast competition among organizations and government offices. They battle for the best three Krathongs, and some take it as a beauty contest.

Where is the Thai Lantern Festival?

Even if the Lantern Festival is celebrated universally in Thailand, Chiang Mai will have the most outstanding and finest views of thousands of lanterns freed into the sky all at once.

Why is the Thai Lantern Festivals Celebrated?

In Thailand, to be reborn and enjoy tremendous and enormous purity, people in Thailand pay respect to the great Buddha. Most times, it serves for wishes to be granted.

Throughout the festive lantern period, people dispatch lanterns into the sky as if they are letting go of their mistakes and bad lucks into forgetfulness.

Characteristics of The Thai Lantern Festivals

The Krathongs(“banana stem decorated with banana leaves, candles, designated flowers, and incense sticks’’)are allowed to sail on the water down a river on the night where the full moon is out. It is a symbolic way of starting all over again and letting go of bitterness, hatred, and grudges. Most people of Thailand believe that it brings happiness and Goodluck to them as they let go of the Krathongs.

The lantern signifies “the wish for bright future’’ the lantern is made with paper, called “lampion.”

The lantern festival celebrated in areas with traditions similar to Thailand has different names. As Thailand festival is called “Loi Krathong,” others include Sri Lanka as Il Full Moon Poya, “China as “Lantern Festival, Cambodia as Bon Om Touk, and Myanmar as the Tazaungdaing festival.

Make sure you watch your lanterns until it disappears for best luck.

FOR MORE ON TRAVEL.