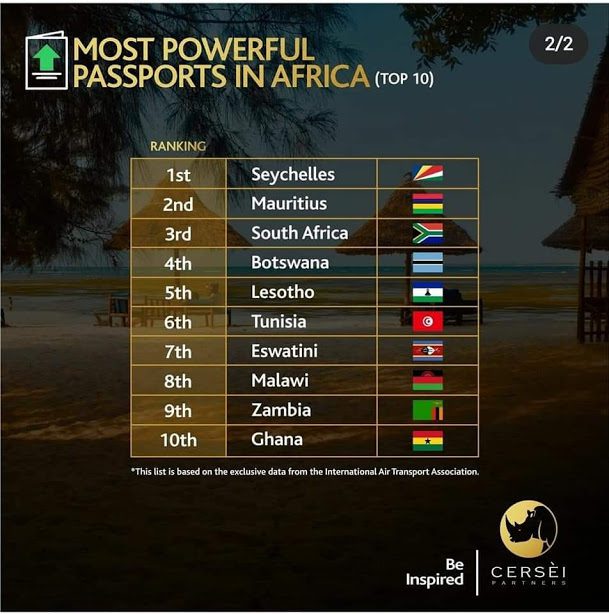 It is quite crucial for any African to own a standard Passport before traveling to any Country in the world. Hence, we would be telling you about the top 10 most powerful passports in Africa and how to acquire them.

According to the Henley Passport Index, it ranks 27th globally in travel freedom and the best ranking African passport. Foreigners visiting Seychelles are granted free visa access, though they must possess a valid passport and accommodation proof.

How Can You Get a Seychelles’ Passport?

An individual who needs a Seychelles’ passport is required to go to an immigration division with some documents like:

i. A Birth Certificate
ii. 2 Copies of passport photographs
iii. A National identity card
iv. Adoption certificate (in adoption cases).
v. Marriage certificate (in case of a married woman) and so on.

(S)He is required to bring someone eligible to countersign the application. This person should be someone who has known the applicant for over two years. The person can be:

i. A Judge, Magistrate, or Barrister.
ii. A Member of the National Assembly.
iii. Head Teacher of a school.
iv. Public Officer (Not below the rank of an Assistant Superintendent of Police) and so on.

Seychelles’ passport is the most powerful in Africa, accessing about 151 countries with or without a Visa.

This passport ranks as the second most powerful passports in Africa, accessing about 146 countries without a visa. The passports are issued to the citizens of the Country. Anyone who is either a citizen by birth, Naturalization, Registration, or marriage is eligible to apply for the passport provided he or she is registered under the law of the Country.

South African’s Passport ranks as the third most powerful passports in Africa. As of July 2020, you can travel to 101 countries without a visa. South African’s Passport now ranks 52nd out of 199 passport issuing Countries in Africa. The cost ranges from R400-R600. To acquire this passport, an individual must possess an original identity document, a duly passport application, color passport photographs. Also, an applicant under the age of 18 is said to have parental consent.

According to the Henley Passport Index, Namibia’s passport ranks 68th in terms of travel freedom. The citizens also have free access to travel to 76 countries and territories with or without a Visa. It takes 2-4 months to get a Namibian passport. However, one might call it easier provided S(He) submits the documents required on time. The passport is green in color with the National coat of arms on the front cover. All information in the passport is printed in English and can also be translated into French. Some of the visa-free Countries with Namibian’s access are:

Lesotho passport is another powerful passport in Africa. It ranks the sixth in Africa and 69th in the world according to Henley Passport Index. This makes it share the same spot with Saudi Arabia on the Henley Passport Index. It allows its citizens to travel to over 74 countries without a visa. The cost varies from USD 200- USD 265. The requirements to own this passport:

This passport, which allows its citizens to travel to 67 countries with or without a visa, ranks the seventh passport in Africa and 73rd globally. Forty-eight pages of this passport cost E300 while 64 pages cost E500. With this passport, Visas are not required for travelers staying less than 30 days.

According to the Henley Passport Index, this passport ranks the 8th most powerful passports in Africa and the 70th regarding travel freedom. Malawi’s Passport holders can travel to 70 countries with or without a visa.

Amazingly, the Kenyan passport ranks the 9th most powerful passports in Africa. This passport ranks 72nd globally according to the Henley Passport index. It is valid in all countries with or without a visa.

Some of the countries who do NOT need an entry visa to Malawi are;

The last most powerful passport on this list is the Tanzanian passport. The passport is issued to its citizens for international travel. It ranks 10th most powerful passport in Africa. It also ranks 73rd in the world according to Henley Passport Index. It allows its citizens to travel to over 70 countries with or without a visa. Within two weeks, an individual can have a Tanzania Passport. Applicants of these passports are to pay a fee of 90 USD, which covers both the application fee and passport fee.